9 Tax Deductions That Are Going Away 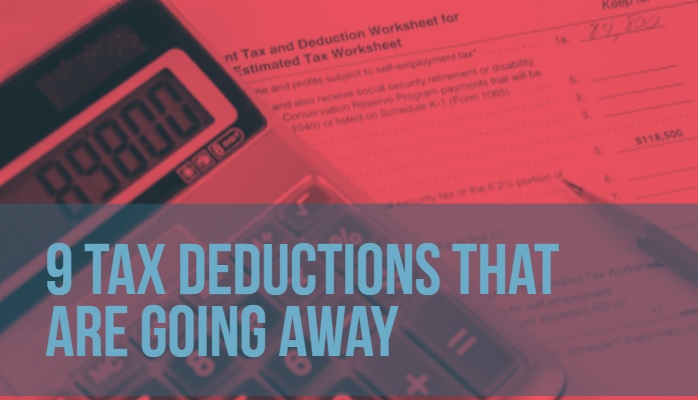 The new tax reform bill is now law, and taxpayers can expect a lot of changes to take place in 2018. Reduced tax rates, higher standard deductions, and higher child tax credits for families are just a few of the perks that individual taxpayers will see next year.

To pay for these tax breaks, however, lawmakers took away many deductions that millions of taxpayers had used every year to reduce their tax bills. The nine deductions we’ll discuss are just some of the popular provisions that will disappear, and taxpayers will have to look closely at their own personal situations to see whether other, less common deductions are also going away.

The biggest move that the tax reform bill made was to take away personal exemptions, which generally allowed taxpayers to reduce their taxable income by $4,050 per person.

Mortgage interest on purchase loans is still deductible under tax reform up to $750,000, but the deduction for interest on home equity loans becomes nondeductible once 2018 begins.

Taxpayers won’t be allowed to deduct moving expenses, as they can for 2017. To be deductible, a move had to be motivated by a job change, with the new job being at least 50 miles further from where you used to live than your old job was.

4. Casualty and theft losses except in disaster areas

Casualty losses under old law were eligible as itemized deductions to the extent that they exceeded $100 plus 10% of your adjusted gross income.

Money you spent on certain job costs, such as license and regulatory fees, required medical tests, and unreimbursed continuing education, was available as an itemized deduction to the extent that it and other miscellaneous deductions exceeded 2% of your adjusted gross income.

Employees were eligible under old tax law to get up to $255 per month from their employers to subsidize parking costs or transit passes.

Just like job expenses, costs to have your taxes done were also available as miscellaneous itemized deductions.

A host of other miscellaneous deductions subject to the 2% AGI limitation will all be gone in 2018.

9. Donations to colleges in exchange for athletic event seats

One controversial provision allowed donors to give money to colleges and deduct the full amount, even if they got back tickets or seating rights to athletic events.

If you have any questions on how these 9 items will affect your 2018 tax return, click here to speak with one of our tax professionals.